Catalog of an exhibition held at the Kunstmuseum Bonn, 25 September 2014 – 4 January 2015; and at the Städtische Galerie im Lenbachhaus und Kunstbau, Munich, 28 January – 3 May 2015; 359 pages with many color illustrations and black and white archival photographs.

I recently began doing some book reviews for Museum Bookstore, an online repository of catalogues and other printed material generated on behalf of museum and gallery exhibitions. My first review is of my favorite book of 2014-2015, the outstanding catalogue presented by the Lenbachhaus and Kunstmuseum Bonn in support of August Macke und Franz Marc: eine Künstlerfreundschaft. Please support this very worthy independent bookstore effort by checking out the companion text on the site.

Published on 26 September 1914 to coincide with the 100th anniversary of the death of August Macke as well as the launch of the ambitious cooperative retrospective of Macke’s and Franz Marc’s overlapping oeuvres, the exhibition catalogue August Macke and Franz Marc: An Artist Friendship (August Macke und Franz Marc: eine Künstlerfreundschaft is its twin in the original German from which the English version has been translated) is, perhaps not surprisingly, a tour-de-force of editing and research. What is unexpected is that the editors, longtime Lenbachhaus Blaue Reiter curator Annegret Hoberg and Volker Adolphs of Kunstmuseum Bonn, along with a smartly-assembled team of university- and museum-based German art historians, bring to bear not just a wealth of knowledge but so much compassion to these essays, confronting directly the loss and sadness we naturally feel over the too-short lives of Marc and Macke. Macke, the extroverted Rhinelander, was killed in Champagne, France, at 27, while Marc, the contemplative Bavarian, died aged 36 at Verdun in the spring of 1916.

Despite their frank sentimentality, the catalogue’s chapters and essays are impeccably scholarly. Hoberg’s “August Macke and Franz Marc / Ideas for a Renewal of Painting” and Adolphs’ “Seeing the World and Seeing Through the World / Nature in the Work of August Macke and Franz Marc” are classic art historiography based in peerless analysis. Hoberg focuses on the milieu of the international avant-garde that encouraged Marc and Macke to not only follow the careers of but become personally acquainted with the Parisian Orphist Robert Delaunay and the Italian Futurist Umberto Boccioni. While Marc’s primary subjects directly encompass animals and the pastoral, albeit reframed through a unique pantheistic realism, Macke, who often painted urban scenes, has a less direct relationship to “nature,” which Adolphs teases out, particularly in comparison to Marc.
END_OF_DOCUMENT_TOKEN_TO_BE_REPLACED

Franz Marc’s and August Macke’s Paradies: We Meet in Münster

Whatever happens in the future, my time in Münster will be the happiest I can ever remember. I was there for several weeks and finally had a substantial Paradies mural Franz Marc and August Macke made together in Macke’s upstairs atelier in Bonn in 1912. The mural was moved to Münster’s LWL-Museum für Kunst und Kultur in 1984. In a quiet room away from the museum’s main traffic areas, the mural is now the altar of a shrine to Macke and his relationship with his wife Elizabeth but also with Marc, phrases from his many letters to August decorating the blue walls.

The Hanseatic light of the west is stunning and soothing, like a house you’ve lived in your entire life – something almost no one does anymore that seems like a real memory. 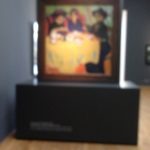 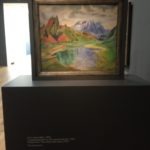 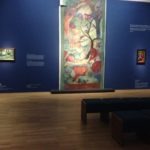 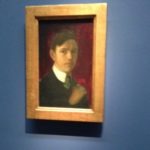 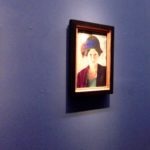 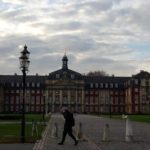 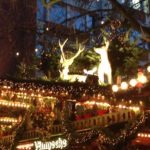 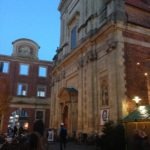 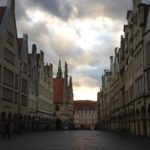 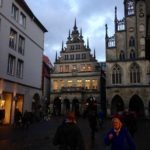 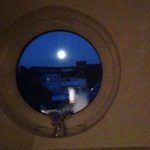 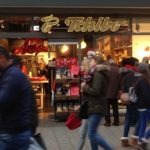 It was a very emotional experience and had some typical Bavarian humorous adventures as well. I arrived on the regional train at about 11:00 on a dazzling clear, cold day, with most of the snow from the previous week’s blizzard still on the ground. The Ammergau Alps, what Marc called „das blaues Land“, glowed. Inserting itself into this majestic, somber first act was the fact that, in Kochel, Ruhezeit on Fridays apparently begins at 11:00…and this was a very intense Ruhezeit too…everything had abruptly closed, including the flower shop where I had intended to get some violets. I should add that all the flowers and plants were just sitting there outside, and the doors to the shop were open, but the lights were off and the people away being quiet. This was the same at other shops – I have always found it very amusing that in places where Ruhezeit is taken seriously, lunch places also close, even though Ruhezeit is at lunch time, and Kochel takes Ruhezeit quite seriously. In fact it was Friday Ruhezeit the entire time I was there. I stayed until 16:00, the hour of Marc’s death.
END_OF_DOCUMENT_TOKEN_TO_BE_REPLACED

(My) “Recent Publications” on Franz Marc

“Recent publications” is in quotes because all of the great opportunities to preach the gospel of Marc lately have come to me strictly through the generosity of other people, so I will quickly get to the point of thanking Trang Vu Thuy and the curatorial staff at the Lenbachhaus and Janine Arnold of Notes About Art. (Please click through the links to view the articles themselves.)

My post (which is present entirely owing to the patience of Vu Thuy) “Ein Manifest der Freundschaft” is in honor of the August Macke und Franz Marc: Eine Künstlerfreundschaft exhibition (on through 3 May 2015 in the Lenbachhaus Kunstbau) and concerns one of my favorite subjects, the Paradies mural.

“Von »Köstlichen Figürchen« und »Wunderherlichen Farben«” by assistant curator Monika Bayer-Wermuth is actually the most wonderful post, though, on the gifts sent by the Marcs to the Mackes and is told in the same thoughtful, personal vein as are many of the chapters in the companion catalogue.

Thanks to the generous invitation of Arnold, I have two entries on her Notes About Art website, one called “Confrontations & Reconciliations” about my interpretation of Franz Marc’s gift of the painting Blaues Pferdchen, Kinderbild to August Macke and the other a bit about the history of Marc’s two Turm der blauen Pferde.

I am very happy to see art historians collaborating across distance and language just because we like the art and want for other people to be able to know about and appreciate the work of Der Blaue Reiter. END_OF_DOCUMENT_TOKEN_TO_BE_REPLACED