It was a very emotional experience and had some typical Bavarian humorous adventures as well. I arrived on the regional train at about 11:00 on a dazzling clear, cold day, with most of the snow from the previous week’s blizzard still on the ground. The Ammergau Alps, what Marc called „das blaues Land“, glowed. Inserting itself into this majestic, somber first act was the fact that, in Kochel, Ruhezeit on Fridays apparently begins at 11:00…and this was a very intense Ruhezeit too…everything had abruptly closed, including the flower shop where I had intended to get some violets. I should add that all the flowers and plants were just sitting there outside, and the doors to the shop were open, but the lights were off and the people away being quiet. This was the same at other shops – I have always found it very amusing that in places where Ruhezeit is taken seriously, lunch places also close, even though Ruhezeit is at lunch time, and Kochel takes Ruhezeit quite seriously. In fact it was Friday Ruhezeit the entire time I was there. I stayed until 16:00, the hour of Marc’s death.

I walked the short distance to St. Michael’s Catholic Church, where Marc and Maria Marc are buried in the small graveyard behind the church. I wondered what Marc would think about having been disinterred from his original grave, in the woods near Braquis, France, where he had fallen. There he was with his beloved horse Eva when he died, lain quietly in the forest. Marc believed in unknown gods, and wanted only the animals and the stars for his pantheistic comrades.

But much to my surprise the church’s graveyard was silent and empty of humans too.

I must say I was a little annoyed that the PdM and the Lenbachhaus, who earn substantial revenue from the licensing of Marc’s images, could not have been bothered to send a representative with a token wreath, to make a donation for the graveyard’s upkeep, or, what would have actually made the most sense, to have created a Marc Memorial Fund for the Tierschutzverein München.

On the other hand I did not mind having the place to myself. When I went inside the austere whitewashed church I was very surprised to see an ornate baroque chapel concealed inside. It was here, reminded of the rituals of my own Catholic childhood, that I really became overwhelmed just by everything. In researching and writing about Marc, I am always in the present; the present of turn-of-the-20th Century München and Europe, in the midst of Marc’s enormous activity and troublemaking, and so the moment in time, the tragic event that is always coming, is yet kept at bay. Here at last I had to face it, though, and of course many other sad things that are always just outside the light of the torch.

In any case, here are some new photographs of the grave of the Marcs and the surrounding area. As always if you have any questions, please feel free to ask. 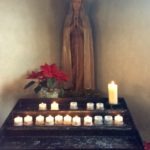 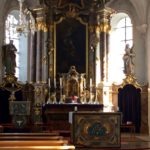 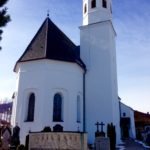 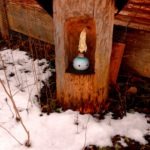 A proper Bavarian Marterl in Kochel. 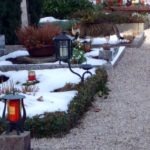 A special but not unexpected guest. 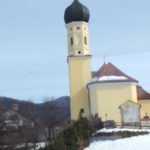