Star Wars and the Power of Costume, Museum of Fine Arts St. Petersburg This is a “locally-coloured” version of this exhibition review. See the “professional” iterations at Humanities Commons or on the Museum Bookstore website.

On view through the spring, this exhibition features 60 costumes representing characters from the Star Wars film saga from A New Hope in 1977 through The Force Awakens in 2015. These outfits are accompanied by selected accessories: props such as light sabers and artists’ sketches of how the costumes, and characters were originally envisioned and evolved. As a group the costumes highlight the intricacy of theatrical and cinematic clothing design. Membership in the cult of Star Wars is not a prerequisite for their appreciation.

These costumes and the drawings giving their background illustrate the evolution from storyboard to screen, and then of the characters who wear these ornaments and attributes. The earlier pieces from the original trilogy – The Empire Strikes Back (1980) and Return of the Jedi (1983) followed A New Hope – are closely allied to the vaguely fascistic, neo-classical iconography favoured by creator George Lucas. These styles – Reich-referencing Imperial officer and Stormtrooper uniforms, the togas and cloaks for Jedi masters Obi-Wan Kenobi and Luke Skywalker – tend to be simplified and literal. As the series progressed with Episodes I, II, and II I – The Phantom Menace (1999), Attack of the Clones (2002), and Revenge of the Sith (2005) – the prequels that appeared fourth, fifth, and sixth in order of release – costumes for both the Republic officials such as Bail Organa and Imperial minion Darth Sidious tend to be highly decorated while more referentially abstract. Particularly the scarlet robe and ornate crown for Princess-Senator Padmé Amidala Naberrie’s Phantom Menace throne room garb, which greets visitors at the exhibit’s entrance, is a marvel. The dazzling effect of the wardrobe of Padmé, portrayed in the films by Natalie Portman, was achieved by the imaginative and subtle use of beads, paillettes, layers of leggings and petticoats, and embedded electronics. Her trains of shimmering brocade and elaborate ceremonial gowns and headdresses show strong influences from feudal Mongolia and Shōgun era Japan. I was astonished to see the level of handicraft and detail given to each garment, having assumed that costumes in a fantasy epic were embellished by computer-generated animations such as those that brought Katniss Everdeen’s “flame” gown to the screen in The Hunger Games: Catching Fire (2013).

During the current decade and the most recent iteration, The Force Awakens, which takes place after the events of the first six films, filmic fashions change again, forsaking Padmé’s suffocating layers of finery (and Princess Leia’s famous chain mail bikini for that matter), glorifying the physical prowess of the galaxy’s new saviour, Rey (Daisy Ridley). Rather than being cut or molded to conform to a conventional female form, Rey’s gauzy desert gear just skims the body, ogle-worthiness subservient to Rey’s resourcefulness and athleticism. With an emphasis on gestures and hand-to-hand combat in The Force Awakens, the arms become the focal point of these contemporary costumes, and color recedes in importance, though to be sure new antagonist Kylo Ren is clad in dramatic black, connecting Ren (Adam Driver) to his forebear Darth Vader, whose costume is also on hand.

Darth Vader’s labored breathing (originally created with a scuba diving air regulator) is as much a signature of the character as his appearance and sound – from John Williams’s score to R2-D2’s Droid language of chirps and clicks – is an important aspect of the Star Wars films. The sonic component of the Museum of Fine Arts’ exhibit design is a distraction, however, with tinny speakers piping in snatches of the overture and orchestral theme music, incongruous to the quality and surprising solemnity of the overall exhibit. This misstep is particularly evident in the “Outlaws and Outsiders” gallery, which showcases the intergalactic characters from the cantina scene in the first film but is accompanied by the familiar irksome organ grinder refrain. Short videos of interviews with artists, designers and actors are also annoying.

The rest of the presentation of The Power of Costume is of a very high caliber. Of great interest are character and costume concept drawings by artists Ralph McQuarrie and Iain McCaig and the final costume designs of Trisha Biggar and the recently deceased John Mollo. While the appearance of Darth Vader, Chewbacca, and Frank Oz’s Yoda went from sketch to screen with few mutations, some early iterations of Padmé and Han Solo are almost unrecognizable. To create a proper thematic environment for the exhibit the museum knocked out two gallery walls, creating a system of spacious, track-lit alcoves that flow one to the next while clearly delineating chapters such as “Dressing a Galaxy” and “Jedi vs. Sith.” This path opens in a spectacular high-ceilinged room-in-the-round in which shows figures suspended in a walk-around light-saber battle. This “site-specific installation” was created by senior preparator Thaddeus Root and Ruth Trevarrow, the registrar for the Smithsonian.

Trevarrow was on-site during this staging phase; Myriam Springuel, director of the Smithsonian Institution Traveling Exhibition Service (SITES), and Jennifer Schommer, assistant director of public affairs for SITES were on hand for a press preview at the museum in November. In an indication of both the freighted commercial tie-ins to Lucasfilm and the MFA’s uncertain public presence, a member of the Edelman global public relations firm’s entourage actually spoke as an authority on the exhibit during this event. Many museums retain PR firms – discreetly – to boost in-house promotional efforts but this breach of the decorum of effortlessness was quite unusual. When I wrote Edelman later with a question about the spelling of a name, I got a hasty response from downtown St. Petersburg-based B2 Communications, which has replaced Edelman. It would be great to see the SPMFA get control of the “low communication” problems that often mar its national and international profile.

The question of whether displays of pop cultural artefacts – other such traveling exhibits have showcased relics from the Harry Potter movies and the wardrobe of actress Glenn Close – belong in institutions with “fine arts” in their names remains. By treating the displayed objects with the same gravitas as the paintings and sculptures in its other wings, the SPMFA makes a case at least for sincerity.

Star Wars and the Power of Costume. Museum of Fine Arts, St. Petersburg. 255 Beach Drive NE, St. Petersburg, Florida. On view through 1 April 2018. The traveling exhibition appeared previously at the Cincinnati Museum Center, Cincinnati, Ohio from 25 May–1 October 2017 and will be shown next at the Detroit Institute of Arts in Detroit, Michigan, from 20 May-30 September 2018.

Developed by the Smithsonian Institution Traveling Exhibition Service (SITES) in partnership with the Lucas Museum of Narrative Art and in consultation with Lucasfilm Ltd.; overseen by SITES director Myriam Springuel. In-house curation by Jorge Vidal. 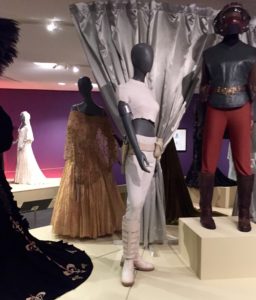 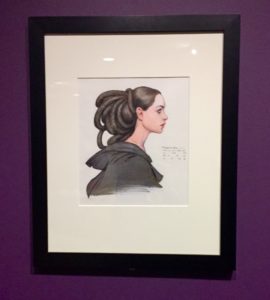 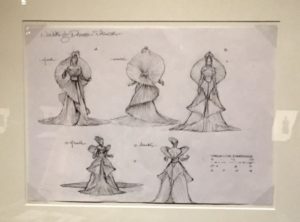 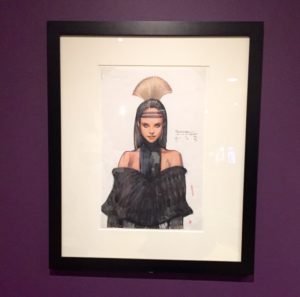 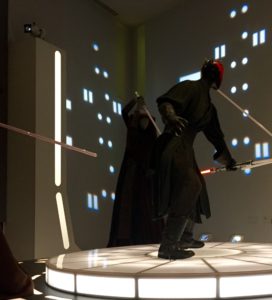 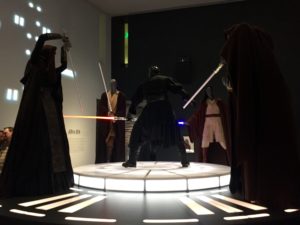 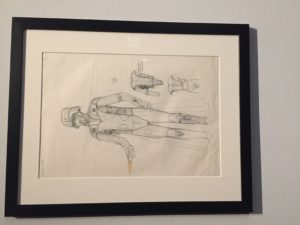 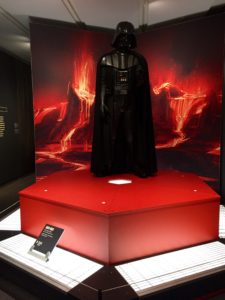 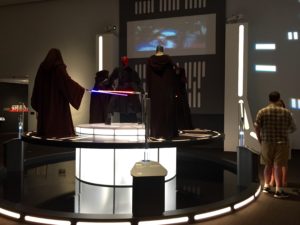 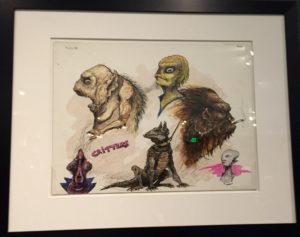 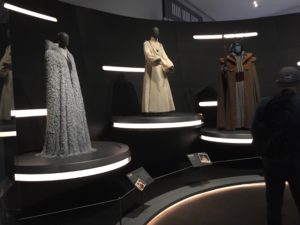 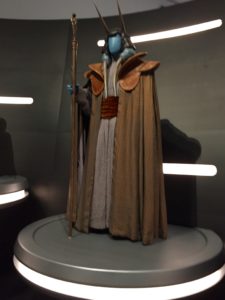 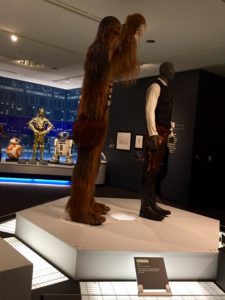 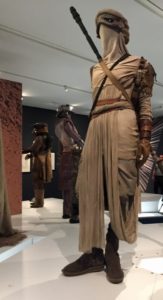 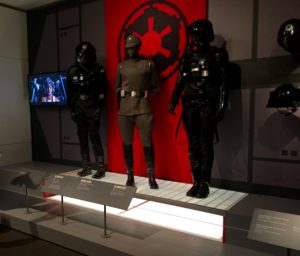 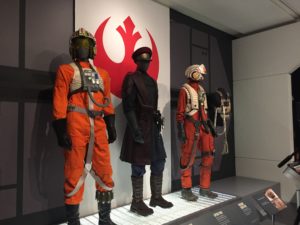 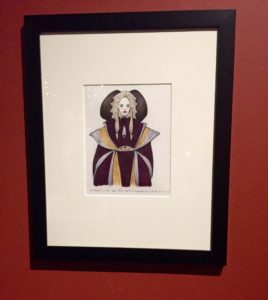 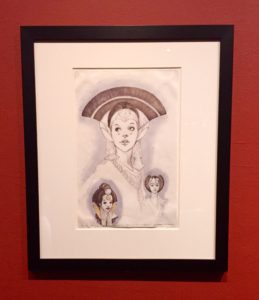 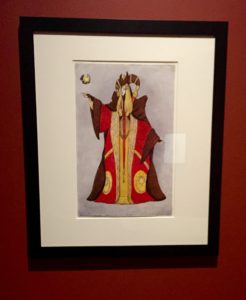 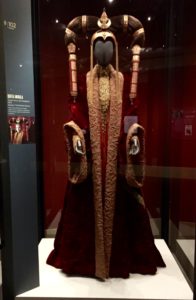 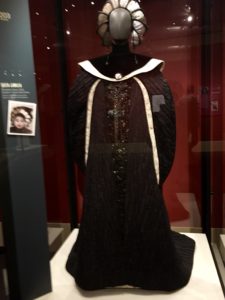