Perhaps the lone Documenta installation aspiring to Gesamtkunstwerk is Arin Rungjang’s 246247596248914102516… And then there were none (Democracy Monument) (2017). The installation is composed of a wood and brass panel-frieze, sculpture, photographic portraits, video installation, paintings, drawings, and books. The video itself includes an original modern dance performance about World War II historic sites in Berlin and Munich, the manufacture of the frieze, and an attendant controversy in Thailand, and – rare for Documenta Kassel – an acknowledgment of the fair’s earlier iteration in Athens. 246247596248914102516 is a reach that might not have worked, but Rungjang’s combination of precision and sincerity is peerless.

Accidentally wandering into another video installation revealed the collision of everything that is wrong and not working about Documenta 14. I was actually drawn to the screening room by the sound of some industrial-rap-bass beats, and sat down to view what was basically a pretty conventional-looking music video from the mid-2000s, when this type of music was often accompanied by simple computer graphics with strangely (armored Humvees, tanks, helicopters) militaristic props. I learned later (through way more sleuthing than it should have taken) that this was in fact literally a music video, “Mudd” by “MCCLOUD aka MEGLADONN.”

When the “actual” video resumed I immediately recognized the unmistakable (not in a good way) stylings of Tracey Rose, who I remember very well from various encounters at Art Basel Miami. Like the equally inexplicably successful Ryan Trecartin, Rose’s videos are garish, loud, sadistic, and pornographic and at the same time technically (unintentionally) amateurish and boring. I think this work is called WhoreMoans: An Uncivil Memoir Of A Rough Ride (2017), though neither the title card at the gallery nor the Documenta catalogue entry offers very enlightening information:

I loved all the facets of her and of her work: the mischief and joy and delight of the girl; the boundless sensuality and wisdom of the woman; the vastness of spirit, placing her somewhere between this plane and another, channeling perpetually distant truths, some more gentle and others with more violent vibratory force.

Okay. You can read more about Rose – the type of “feminist” artist who thinks pornography is “empowering” and that “gender” and “sex” are synonyms – and the full entry by Nana Oforiatta Ayim, here. 2012’s Documenta entry from South Africa was William Kentridge’s amazing Refusal of Time contraption and anyone would have faced a challenge in rivaling that presence. However given Candice Breitz’s huge concurrent retrospective in Berlin (she is also featured at the Venice Biennale) perhaps it would have served Documenta better to have searched a bit harder for artists less well represented (cough) from that country.

There are other examples of things that are supposed to be shocking but either refer to accidentally or directly but without the intended effect of every art fair everwhere – “hilarious” take on canonical painting, stacks or bags of a mined or manufactured substance, wall of ethnographic projections with Vangelis-esque soundtrack. The running sushi of internationalism.

Over the summer I have tried to put myself in the place of the many Documenta 14 visitors, many internationals of course particularly from China and Japan, but the most Germans from around the country, maybe especially, surprisingly, from smaller villages in Hesse and Niedersachsen. It must be so disappointing to envision visiting a “German city,” imagining the hustle and energy of Frankfurt, the quaint “Medievalness” of Bamberg, or the structured bike and pedestrian flow of Münster, and then to be deposited in a very average Haussmanized town.

Living here it is very clear that there is a lot of resentment not just between full-time residents and tourists during the year Europe decided it hates tourists, but real hostility between Stadt Kassel and the Documenta organisers. This recent article in the local paper the HNA, “Aufgetaucht aus Athen: Adam Szymczyk ist wieder zurück in Kassel,” takes the curator to task for being off-site so much of the time… While Szymczyk’s absence during the height of the exhibition is is very telling, Documenta’s great flaw is a lack of mid-level curatorial execution. It is as if once the “big idea” of having Documenta in both Athens and Kassel was derived, the basics tasks of displaying artwork, much of it conceptual or granularly political or both and thus requiring some sort of contextual vision, were set aside.

The Neue Neue Galerie space suffers particularly from this shoot-the-artwork-out-of-a-cannon approach. An example is Australian artist Gordon Hookey’s Murriland! (2017), monumental sized wall art displayed in the NNG’s entryway. Murriland! sheer size and creative use of Antipodean English are arresting and I am sure that people do stop to engage with it long enough to figure out the issues it addresses. But lodged so close to another massive show-stopper, Máret Anne Sara’s curtain of skulls, both diminishes its impact and makes people struggle to detect a theme – or if there is one.

As an archivist it pains me to say it, but the “archival moment,” in terms of contemporary art, is over. No one at an international art festival is going to stop to read or even examine a vitrine containing 300 pages about reindeer husbandry expelled from a dot-matrix printer. Same goes for 50 photos of old drive-ins, grain silos, or people smoking and wearing berets. It’s not that this material isn’t interesting, it is – to someone doing research on those respective subjects. Maddeningly, like so many other Kassel-Documenta problems, there is a perfect site for these types of hybrid exhibits – at the “Doc 4” Documenta Archive, a library the city has been trying to get more people to use….

This is actually a good idea and would have been easy enough to implement. Maybe I will curate the next Documenta. 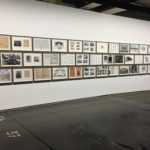 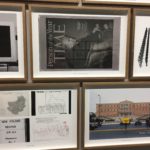 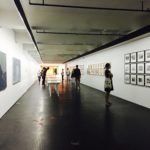