Franz Marc’s mysterious nude in a landscape from around 1911.

In clear contrast to the well-planned execution of the grazing horses on its front, the verso of Weidende Pferde IV is wild, mysterious, and haunting, and provides an intimate look at Franz Marc’s more intuitive approach to color and form.

Though the composition is partially obscured, the underlying motifs are clear enough.

Shown is a reclining female nude in a dimly lighted landscape under a deep blue sky. The figure rests on her back, her right leg is bent. Her head with long and flowing red hair is slightly tilted to the right; her arms clasped behind her. This figure is somewhat characteristic for Marc in terms of the visible hatching and decorated, colorful outlines. The left of the picture area seems to indicate another figure whose gender and position we can only guess at. The middle of the picture consists of a dramatic, deeply-hued landscape, which in turn is what the reclining nude in the foreground would be part of and also looking at. Though Marc often painted nude figures relaxing outside, this painting does not seem to correspond to another finished work. Weidende Pferde IV is also a stunning picture when considered in terms of Marc’s efforts to produce it: Three red horses with purple mane prance against a lemon-yellow sky and a deep blue rock formation. Marc had devoted a lot of time to developing the arrangement of the horses’ bodies in this formation. Marc had been preoccupied, and had made a difficult and lengthy process of, how exactly to balance the shapes and colors of the horses in the overall composition.

Weidende Pferde IV is the star of the second part of the exhibition trilogy “Franz Marc: Zwischen Utopie und Apokalypse,” presented by the Franz Marc Museum in Kochel on the 100th anniversary of the death year of the painter. This is one of just a few paintings that Marc saw hung in a museum himself, following its creation in 1911 and first display at the Thannhauser’s Galerie Moderne in Munich

Marc had been constantly busy with live horses during his years in Kochel and Sindelsdorf (“Pferde auf Bergeshöh gegen die Luft stehend”), and he studied them in detail as he drew, printed and painted them. 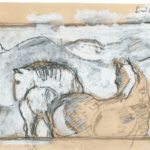 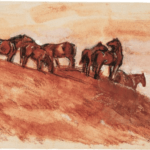 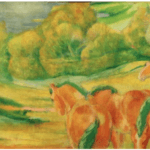 The visitors loved the paintings, and by the day of his 31st birthday on 8 February Marc was a co-chairman of Neue Künstlervereinigung München.

Certainly the powerful painting of the reclining redhead should be regarded as an entirely discrete creation and given a proper name and place in the artist’s catalogue raisonné. It is curious that Harvard University’s Busch-Reisinger Museum, which purchased the painting when it was declared Entartete Kunst in 1937, has not taken the initiative to see that this is done. If only this painting could be permanently repatriated to Kochel, where it belongs.