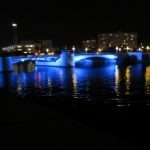 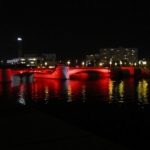 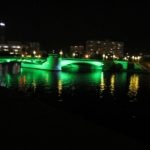 I was trying to think of the most hyperbolic way possible to describe the failure of the vague downtown Tampa “bridge lighting” from this past Friday (10 August 2012) but I can’t really think of anything that describes the underwhelmingness of the dead city this evening except that it was pretty much like any other summer, 100+ degree night downtown only with a few hipsters and scenesters. In terms of metrics I learned that 1000 people will not put in a dent in the cavernous space from the Tampa Museum of Art through Kiley Garden to Kennedy Boulevard.

The bridge lighting (the actual name of the event was “Agua Luces”) itself alternated monochrome projections, as if someone was turning one of those rotating color Christmas tree lighting wheels (I’m not explaining it very well; one of these) at an exceedingly slow speed (with about the same wattage), rhythmically, as in, with some kind of timing system, and yet not in the least hypnotically or soothingly.

It would have been more dynamic to have projected The Wizard of Oz, which was being shown in the park, onto the bridges. If someone had given a bunch of kids some laser pointers and they pointed them at the bridges, that would have been more interesting. A Mac desktop or even a Windows desktop. Someone making shadow puppets without even a real puppet, like, rabbit ears or something. Literally anything involving lights, bridges, the reflection from water, and being outside…

What do people think?  What are your projection ideas?

Thank you for the many emailed questions and comments about this post. Please feel free to share these concerns as comments here so other people can see them.

In response to the question about the cost of Agua Luces / Bridge Lighting, I was not easily able to discover a dollar figure, though this information is posted on the lightsontampa Website with respect to the origin of the project: “Lights On Tampa is a public/private partnership between the City of Tampa’s Art Programs Division and the Public Art Alliance, a 501(c)3 organization. The Program began in 2006 with the desire to bring something bold, of high quality and “on the moment” to Tampa…” noting that the Agua Luces was originally scheduled to commence in 2006 but did not, and “The City of Tampa hopes that with continued private sector support Agua Luces will be extended to the remaining bridges in downtown by 2014.  Lighting all nine bridges, as well as the Lee Roy Selmon Expressway which intersects with the Tampa Riverwalk, is a fundamental vision for the City of Tampa. Chicago-based lighting artist Tracey Dear who lit the bridges in Chicago as well as the Wrigley Building, was chosen for the installation.”

This is very telling information if you hack through it. I think “on the moment” must be one of those flack phrases (which I see sprinkled throughout that Website, along with photos of the bridges from the Tampa Club or wherever — places not even the most determined first-generation social climbers have access to let alone the public) that has a vague meaning, but seemingly by any definition, in 2012, we are no longer “on the moment” in the art world of 2006. Still you can’t fault the artist for accepting the commission although clearly there is more pedestrian traffic and people in general around the bridges in Chicago.

And it is also not surprising that “a fundamental vision” for Tampa from civic leaders is for something bland and shiny, as opposed to making the “light” rail happen, refurbishing the John Germany library a few blocks away from all the bridges, or whatever.