Here are some more recent acquisitions from the rueful “Island of Misfit Books” project.

You probably know all about William Wordsworth, the English Romantic poet who was friends with Samuel Taylor Coleridge, with whom he visited Rheinland-Pfalz where they first got the idea to translate Goethe’s Faustus.

This volume is called Poems of Wordsworth Chosen and edited by Matthew Arnold. Arnold was an English professor (at Rugby and then Oxford) who was also a poet; “Dover Beach” is often referenced by Ian McEwan and appears in Fahrenheit 451. This book is a printing from 1893. The spine is very bent and there are fingerprints and some faint traces of pencil on almost every page…someone really liked this book.

Crime novelist and short story writer Edgar Wallace was also quite a character and became, in 1927, one of the first authors to secure a deal with a movie studio for stories and scripts. This turned out to be a good thing because Wallace was also, earlier, the creator of King Kong. (In the scene in the basement tavern in Inglourious Basterds during the “Who Am I?” game there are references to both King Kong and Wallace.) As you can see by the cover of White Face, Wallace was also academically ahead of his time, having devoted several hundred pages lo in 1930 to the exploration of the astonishing theory that, indeed, some segment of the population — perhaps even you — is in fact white. A film was made of White Face as well; it premiered in March 1932, just a few weeks after Wallace’s death in February of the same year.

Speaking of trends in scholarship, of course it is no longer necessary to speak French or go to France in order to become a person of letters on French subjects. Nonthetless, my favorite book in this trio is the Brief French Grammar. It was the property of a the New York Public Library in the second decade of the 1900s, and then of the Board of Education of the City of New York where it circulated until 1936. A very enthusiastic student marked a routing slip left inside the book with an emphatic red date: Le Juin 22, 1920. Completely adorable. 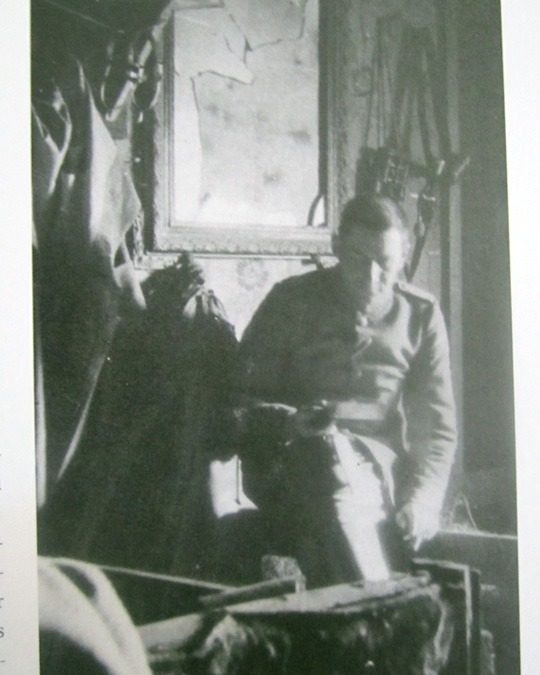 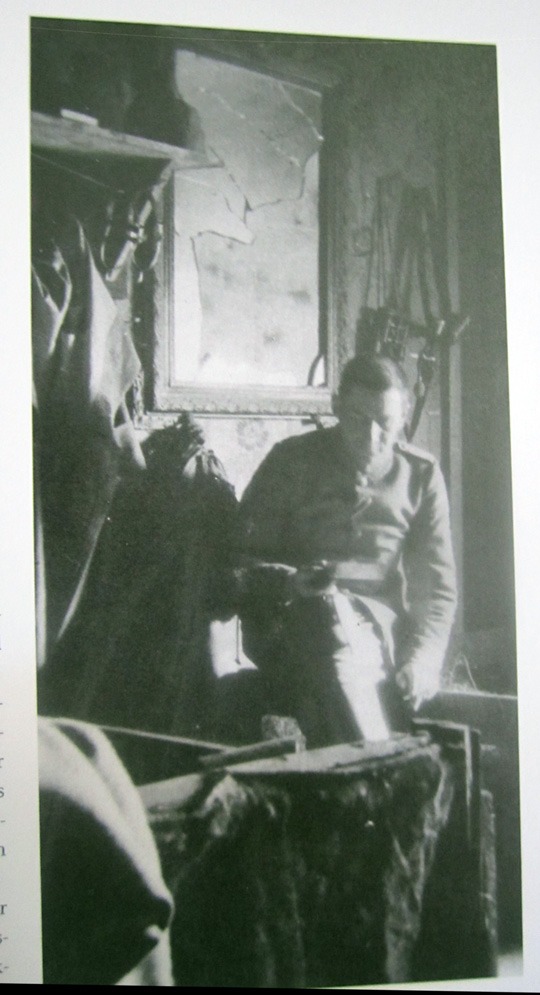 Here is a mysterious photograph from Franz Marc – Paul Klee: ein Dialog in Bildern, a volume beautifully illustrated with the artists’ postcards to each other and some interesting photographs. Klee seems more vulnerable and less arch than you might expect in these letters and drawings. Marc, maybe predictably, sort of absorbs and reflects Klee; yet the images and texts on the cards seem both entwined and quotidian. One of the photos is this fascinating unsourced image, captioned “Franz Marc im Unterstand, 1915/1916.” It’s hard to tell what kind of shelter this is…it appears shell-shocked and comfortable at the same time. There are some binoculars and map cases hanging, and an eerie prophetic broken mirror. FM is smoking, of course, but the captivating question is what is he holding?

It looks like a cell phone, the kind you would expect FM to have, not a Blackberry or an iPhone, just a functional Nokia with Alpenlaendische Volksmusik ringtones. Photography professors, librarians, and two photo archivists who specialize in early 20th Century images looked at this photo and everyone was perplexed about the photo shows. That’s just how FM rolls.

What do you think this object is?

This book (which is confusingly cataloged with lots of commas instead of the conjunctions and articles that appear actually in print) forms the combined catalog from three retrospectives from 2010 at
the Franz Marc Museum in Kochel am See;  the Stiftung Moritzburg (“Kunstmuseum des Landes Sachsen-Anhalt” in Halle, the craziest city in Flemish Brabant and the planet); and  Zentrum Paul Klee in Bern. This is a really big week for birthdays: Bob Marley on 6 February (1945) [“it takes a revolution to make a solution”] and Saint Thomas More on 7 February (1478). More and more scholars agree ...the New Isle Called Utopia is a true socialist manifesto and I  concur!

Most importantly though, 8 February  (1880) is the birthday of painter, writer, animal sanctuarist, soldier, and millinery fashion icon Franz Marc.

Fabeltier (1912) is a plate from Der Blaue Reiter. Is the image a tiny (Italian Greyhound-looking) fanciful creature by a regular-size strawberry, or a giant strawberry with a little dog, or something else? I don’t know; it’s just fun and mysterious. Marc made a few illustrations like this called various iterations of Fabeltier but like gargoyles the animals resemble dogs, horses, lions…I especially like this one but they are all fantastic. This is an eerie item to find and I would return it if I could because I love Ruffian and also I have had almost the entire collection of Breyer model horses since I was little. Unshockingly I played with the toy horses the way other kids did dolls.

I did not have this one though…I looked on the Breyer Website where the Ruffian model is listed as “retired” along with the Clydesdale! That’s terrible; the Clydesdale is awesome.

Here is the text printed on the card:

“A Thoroughbred blessed with blazing speed, Ruffian’s brief but brilliant career was marked by triumph and tragedy.

In 1972, a nearly black filly with a tiny star was foaled in Kentucky. Bred by Mr. and Mrs. Stuart Janney Jr. of Locust Hill Farm, she was a tough, independent tomboy who was big for a filly (16.2 hands) and unstoppable from the start.

With Frank Whiteley Jr. training, Ruffian won her debut race easily, dismissing the first of many records, in her next four outings. As a 2-year-old, she established an explosive, fly-to-the-front-style that overwhelmed her competition and earned her the Two-Year-Old Filly Championship. But could she do this over longer distances, and against colts?

At three, Ruffian reeled off five more victories, racing longer and faster and dominating the New York Filly Triple Crown. Then, the New York Racing Association proposed a contest between the three winners of the all-male Triple Crown races. Still undefeated, Ruffian was invited to test her speed against the country’s best colts. But Avatar and Master Derby scratched, leaving her to duel only with Kentucky Derby Winner Foolish Pleasure.

Billed as “The Battle of the Sexes,” the match race occured July 6, 1975 at New York’s Belmont Park. Headed briefly at the start, Ruffian battled to a 1/2-length  advantage when, suddenly, her right foreleg gave way.

So great was Ruffian’s courage that she fought jockey Jacinto Vasquez’s attempts to pull her up. Veterinarians struggled all night to save her shattered ankle, but Ruffian proved a poor patient, injuring herself even further after awakening from anasthesia. Ultimately, the difficult decision to euthanize her was made.

Now considered the greatest racing filly of all time, Ruffian was buried at Belmont Park and is remembered in the Hall of Fame.” The Lure of Salvage 2

This book, The Hour of Our Death by Philippe Aries (New York: Knopf, 1961) and the pages inside it was rebound recently, with the ad hoc call slip of a patron (who apparently had found the book) joined to new (sewn) binding.

Call slip bound into “Remote and Imminent Death,” in The Hour of Our Death